Blowing the lid off the shame of not knowing

What is The Democracy Box?

The Democracy Box is a year long politically neutral and non-party political research and development project. It has grown out of a need identified in Omidaze’s 2019 pilot Talking Shop

The Democracy Box Challenge Question: How do we make the simplest and stickiest Public & Education Information campaigns to share the  basic level information to the largest number of people possible across multiple media platforms and create the foundation for voter and election related information all year round?

These ongoing year round public and educational information campaign prototypes could potentially increase civic engagement and be developed and replicated across the UK.

The Democracy Box is a Clwstwr funded R&D project.

Scroll down to the bottom of this page to find useful links to all our devolved parliaments and UK parliament and to existing useful content which explains our democratic system. 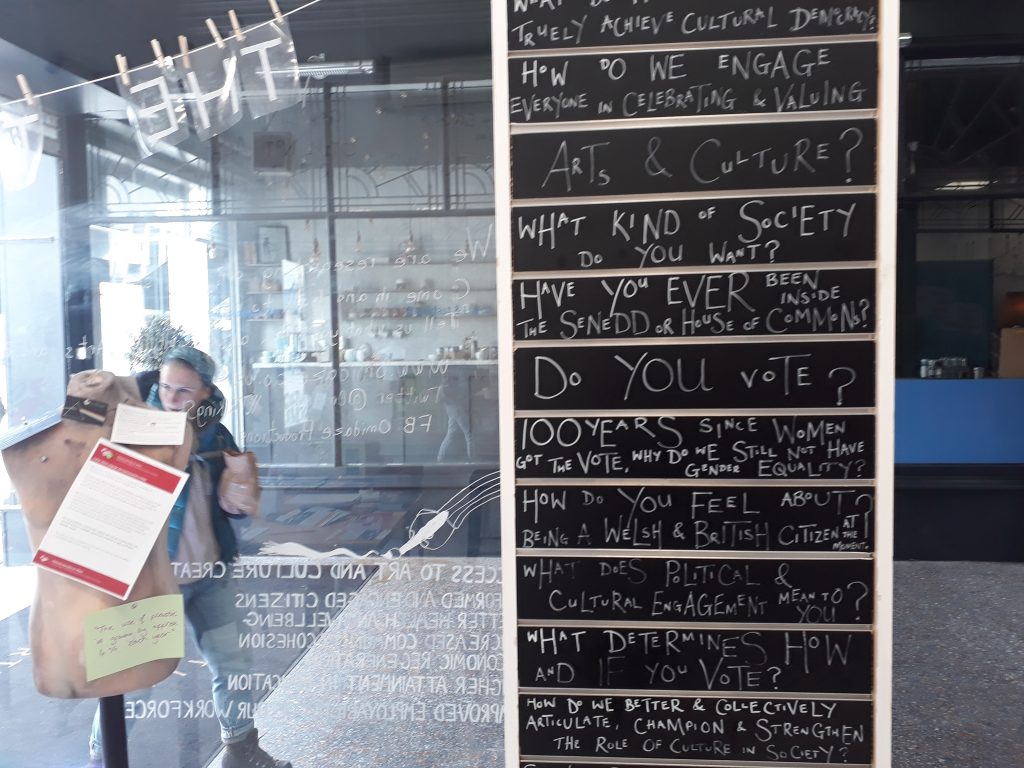 The Democracy Box Confirmed Collaborators so far are…

I Have A Voice

If you would like to collaborate on the project get in touch y.murphy1@ntlworld.com

What is needed and Why?

Many Welsh and UK citizens, including teachers and educators do not have a sound basic understanding of the UK democracy and how local, devolved and Westminster Governments all fit together and why. There should be No Shame & No Blame in not knowing this stuff.

A better understanding of the UK democratic systems and structures by a wider percentage of the population is required.

Listen to the young co-creators talking about the first phase of this project on this mini podcast.

So how do we captivate and engage an audience of millions and include young co-creators/curators and intrigue everyone enough to want to engage with and participate in our democracy all year round and not simply at the ballot box?

Because if we get that right, we think higher engagement and therefore voter turnout will follow.

“Across the world young people are realising that democracies have failed them and future generations to come on issue like climate change, jobs and skills and wellbeing. Part of this problem may be that our education system does not provide enough support to young people to help them understand and engage with democratic systems or processes. The holistic nature of the new curriculum provides an opportunity to address this but teachers and learners must be supported to find creative ways to.  This programme is a way of doing exactly that”  Sophie Howe, Future Generations Commissioner for Wales

The cycle of poor shared storytelling.

The young people I interviewed, surveyed and spoke with were all, without exception, keen to understand our democracy and frustrated that they didn’t. “Why weren’t we taught this at school?” was the constant refrain. There is a shame accompanying not knowing this stuff which moves with us through into adulthood and gets harder and harder to admit to. We need ‘NoShameNoBlame’ surrounding our UK democracy story as two of the young co-creators from phase one titled their podcast.

If you are a teacher it is hard enough to stand in front of a class and teach your own subject. To teach something you do not understand yourself and to do it creatively and thereby engage and inspire young people is a tall order. Teachers may sidestep it all together or resort to the passive practice of putting on a video or handing out a workbook resulting in low level or zero understanding and engagement. The cycle of poor story sharing thereby continues and low democratic engagement and participation with it.

We have identified three possible solutions which we aim to create prototypes of:

There are many people working hard on voter information and political education in Wales & the UK. I am working with them to make this simple basic information campaigns created by young people to explain the fundamental knowledge blocks of our UK democracy. The basics that every citizen should know. Non-election all year-round information.

Together with collaborators, creatives and those disengaged young people from those lowest voter turn-out constituencies we are trying to work out how to make the simplest and ‘stickiest’ Public Information Campaign and Educational Information Campaign possible to share the  basic level information to the largest number of people possible on an ongoing year round basis and create the foundation for all the other voter and election related information.

To make it clear I have divided voter information into four levels. See below. The Democracy Box project is all about level one. The Basics.

The Four Levels of Democratic Information 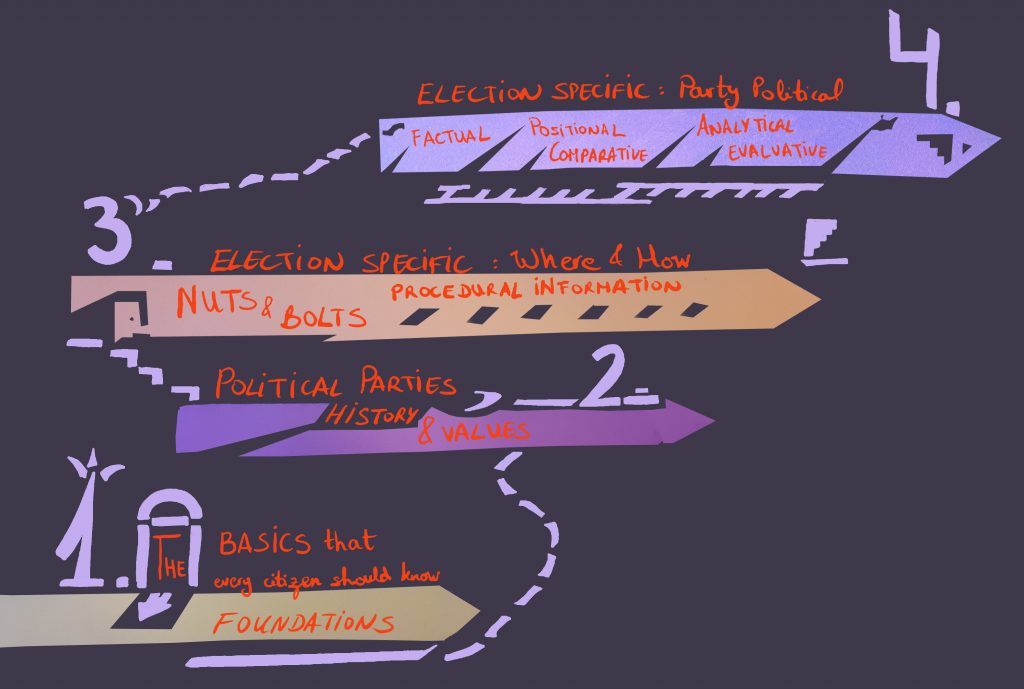 Working with Young people as Co-Creators

At the core of this project are young people. I have now recruited 26 young co-creators aged 16-30 to work on this phase. I will also be holding focus groups with young people to test the content we create and evaluate the impact of the project. I will also be working with creative degree students and professional creatives from across Wales on the prototypes.

In phase 1 I workshopped, surveyed, interviewed, focus grouped and co-created with young people, including those from low turnout constituencies. As one young co-creator said “We need to Be Brave. Be Bold. Be Educated.”

Watch the Ten young people aged 16-30 feedback film who were involved in phase one. Six of those will join me in this second stage along with twenty new young people. I am also developing two ideas from phase 1. The Democracy Box rap series and the Democracy Box podcast series

You can watch our presentation of our phase one work here and the initial young-co-creators ideas.

We are creating a best practice guide for co-creating and collaborating with young people and would be happy to talk about this or help others wanting to engage inclusively, meaningfully and creatively with young people.

By knowledge of our democracy we do not mean party politics

Although the need for neutral factual information about the main political parties which is not linked to election campaigning came up regularly.

We mean informing and educating people about the neutral nuts and bolts. The difference between local government, devolved and Westminster. The difference between the First Minister and the Prime Minister and between an MS , MP and a councillor and what they are each responsible for. Understanding First Past the Post vs Proportional Representation and what a constituency is and what things are devolved in Wales and how laws are made and by whom and what our taxes pay for and who decides and what even the word democracy itself means and how we can get involved and have our say all year round and not just on election days. 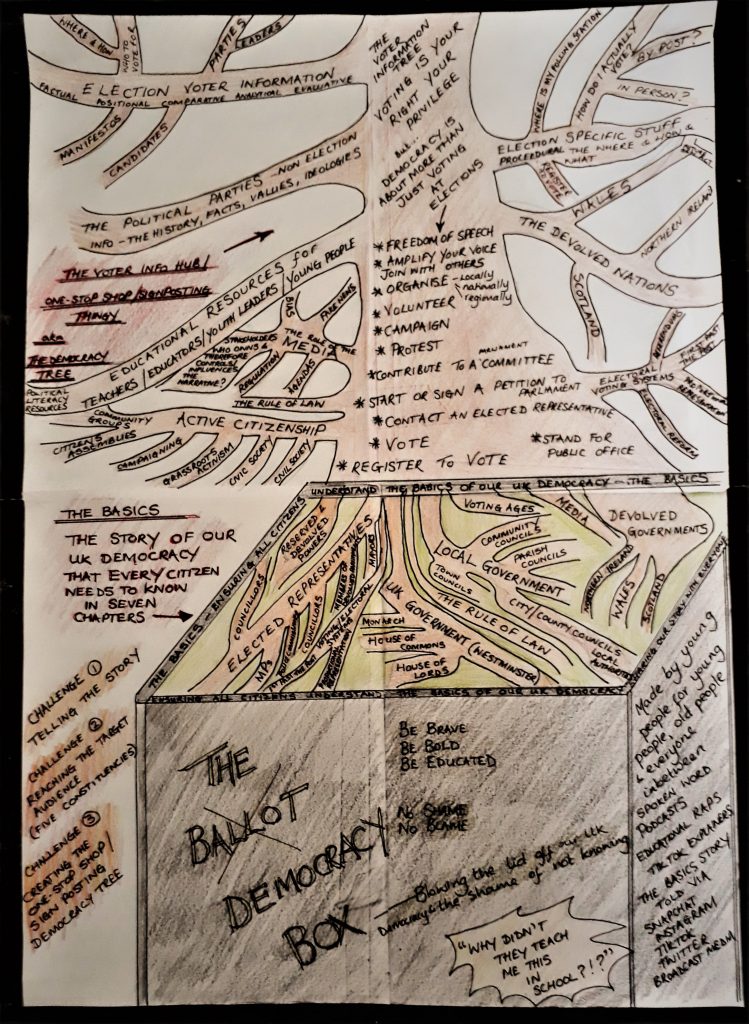 We’ve broken down the information citizens want and need into four levels based on what people have told us they want and need. This project is specifically focussed on Level 1 and how to get that information to the largest number of people possible on an ongoing year round basis to create the foundation for all the other information.

The Democracy Box focus is Level 1. The Basics and Foundations that every UK citizen should know.

Leading up to the first election in Wales where 16 year olds can vote for the first time, there is fast and furious work being done by many organisations including the Electoral Commission, the Welsh Government, the Welsh Parliament, the Electoral Reform Society, educators across Wales and many more. More content is being created. More resources. More teacher/educator guides and packs.

There are a lot of ‘players’ or ‘actors’ in the ‘democracy sector’ all doing brilliant and important work. Many of them are named collaborators on this project.

Any prototype we create must signpost and enable us all us to all to access and navigate our way through all that brilliant content and resources already out there and understand and share our collective story.

Because only when we all know our collective story will we be able to write the next chapter, together. Meanwhile here’s Saynab from phase 1 talking to how many young people she surveyed know who their MP and how she would begin to tell them how and why to contact their MP.

And who is going to pay for all this?

Ultimately I believe this Basic Information and the dissemination of it is the responsibility of the state. We have the platforms to disseminate it in the shape of our state education system and our state funded broadcasters who have it written into their charters and purposes. It needs to be funded by the state and be independent and non-partisan and it needs to have young people aged 16-30 at the very heart of it’s creation and curation.

What happens next is yet to be written.

You can read the proof of concept and report from phase one here.

They Work For You 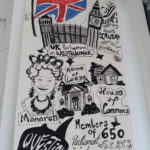 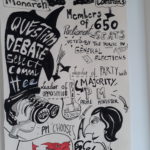 Links to websites for our democratic institutions

More Useful Links to Content which explains our Democratic System

How Parliament Works in nearly 60 seconds

An Introduction to Parliament (Primary)

What is Proportional Representation

What is the House of Commons?

Welsh Parliament -Who we are and what we do

How your vote works in Wales

Democracy in the UK today University of Leeds

What is democracy? – with Danny Wallace Westminster Resource

How do Laws get passed in the UK

Overview of the UK system of government

A brief history of representation, from monarchy to democracy

The Difference between the United Kingdom, Great Britain and England

How do laws get passed by parliament?